It has been 5 years since St Lukes joined the ARK Schools network and became Charter Academy and there have been a wealth of changes in that time. In 2009 79% of students did not achieve 5 A*-C incl. English and Maths, now in 2014 that statistic was turned completely on its head and 79% of students successfully achieved the golden grades. Whilst numbers are important, it is our students own stories and the staff’s drive and dedication to each individual that is equally impressive, even life changing. 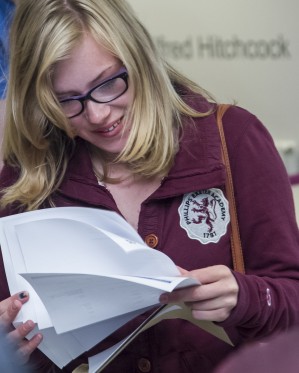 Lee just passed 11 GCSEs, including 2 As and 4 Bs. In September he is going to South Downs College to do a musical theatre course. After that he wants to go to drama school and become an actor.

“I want to do something I enjoy and because of how passionate I am about drama I really want to carry that on further. The school has helped me realise that and they’ve convinced me the higher grades I get the more likely I am to get into either a good drama school or a good university where I could carry on that drama further.”

Holly received an amazing set of GCSE results, despite not learning to read or write until she was 10. She passed 10 GCSEs with 2 A*s, 3 As, 2 Bs and 2 Cs, including an A* in English Literature and an A in English Language. She wants to go to Cambridge University and become a film director.

"I didn’t learn to read and write until I was about nine, 10 years old, but that had been because I’d moved around a lot, I hadn’t really got a lot of schooling in.  It wasn’t until I came to this school that I was actually diagnosed with dyslexia and that’s when they took action and I had an intervention class about once or twice every week and we built up my confidence in reading. Personally I’m quite heavily dyslexic and yet my favourite subject is English. The only way I could get round it was through the extracurricular help that I was given. I kind of have the theory that if you want something then you go and get it.”

A great attitude for us all to aspire to, we’re sure you will agree.